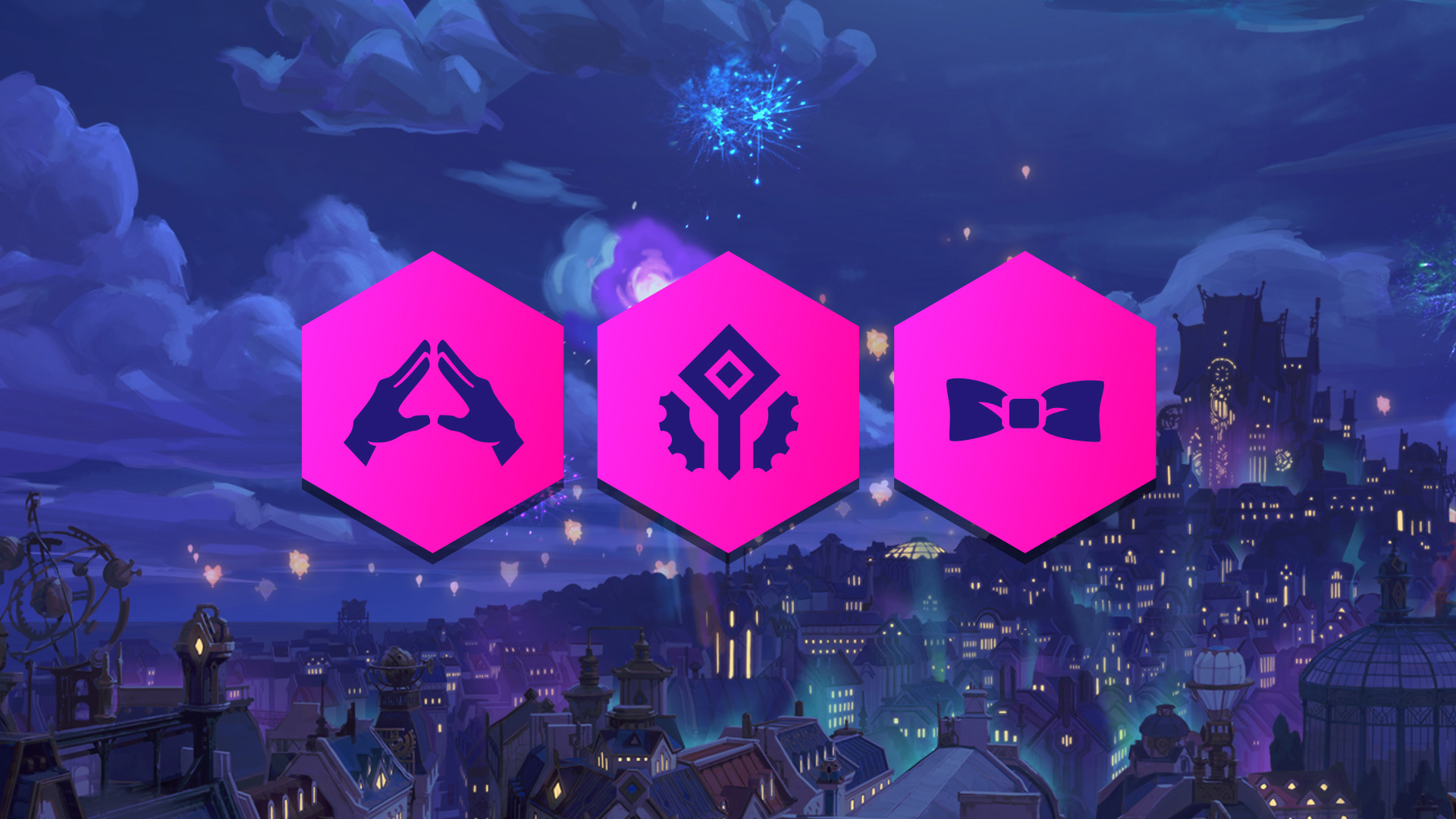 Our largest roster swap to date shines in the latest mid-set update.

More than 20 new units, three champion trait swaps, and a new spell for Vi—and that’s just the beginning! Neon Nights also brings the powerful Debonair and Hextech origins alongside other new traits like Striker, Rivals, and Silco’s exclusive Mastermind mechanic. Oh yeah, Silco’s coming to add more than just his unstable concoction to the mix. All this and more that I just don’t have the word count for hits PBE February 1st and comes to live during patch 12.4 on February 16th!

Keep reading to learn more about our largest mid-set roster swap to date! In addition to everything in this article, there are more than 80 new Augments coming to Neon Nights, which you can find here. And if you’re looking for information on the new cosmetics, click here to see future releases for our future-themed mid-set, coming soon to a future near you!

Stuck in the Past

To make room for the latest and greatest, it’s time for these traits to return to the books!

A keen eye would notice that certain champions from each of the above traits are missing. That’s because they’ve learned new trades to meet the ultramodern demands of Neon Nights. Leona, Talon, Swain, Kassadin, and Blitzcrank will be sticking around, despite some of their traits hitting the road.

Alright, before we get into the big new traits, I should call out that with all these new changes we’re also introducing over 80 new Augments (more on that here).

Welcome to our Hextech dream, where every few seconds the Hexcore (the lil sphere that holds all our Augments) pulses with Hextech energy, granting allied Hextech units a shield for a few seconds. While Hextech units bear this shield, their attacks gain magic damage on hit. 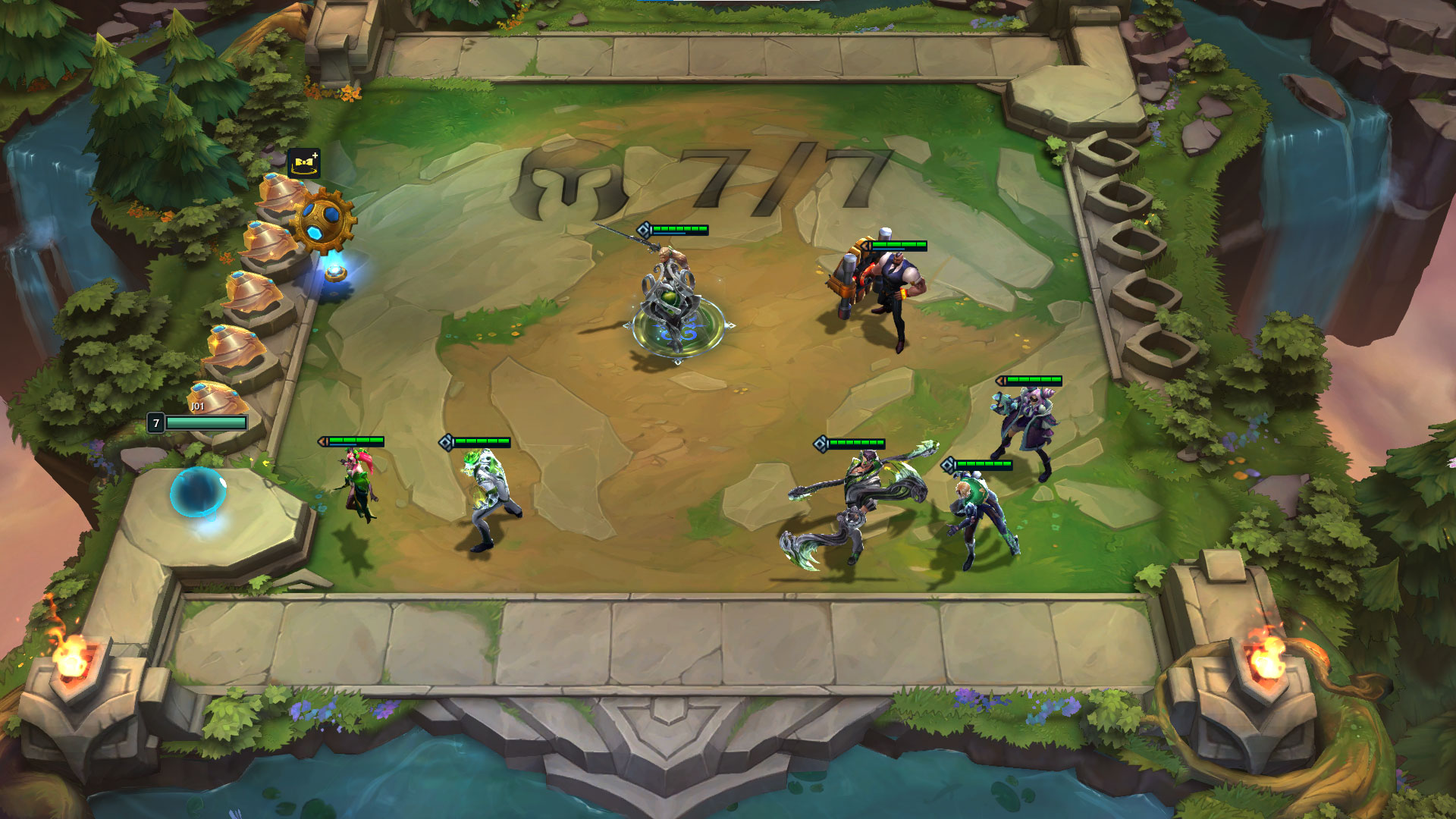 A trait that pulls together party-goers from across the Convergence, these soiree attendees know that there can only be one life of the party: the VIP. While rolling you may come across a very important Debonair unit glowing with importance and User Interface shine. When you have the Debonair trait active, you can field this unit to activate their Debonair bonus which changes based on who your Debonair is.

If the dashing and slashing assassin, Talon, is your Debonair his bleed stacks will deal true damage instead of their typical magic damage. If you find yourself fielding the shielding Leona as your VIP, she’ll heal herself for a small amount of health for each unit targeting her. And if spinning axes are more your style, there’s a VIP with two, Draven, who will receive infinite attack range and ignore a portion of the target’s armor.

The rest of your Debonair units will just get party favors in the form of bonus health and ability power. But if you decide that’s not enough, you can always swap your VIP out with a new one that appears in the shop by selling your current VIP.

If this is your Chosen trait to run, try enhancing the power of your VIP by making sure their items synergize with the bonus and the champion. Try pairing VIP Leona with a Gargoyle Stoneplate, Thornmail, or Dragon’s Claw to create a one-woman-army as your frontline. If Draven’s your VIP, get that Challenger bonus running and toss the guy some attack speed and an Infinity Edge. 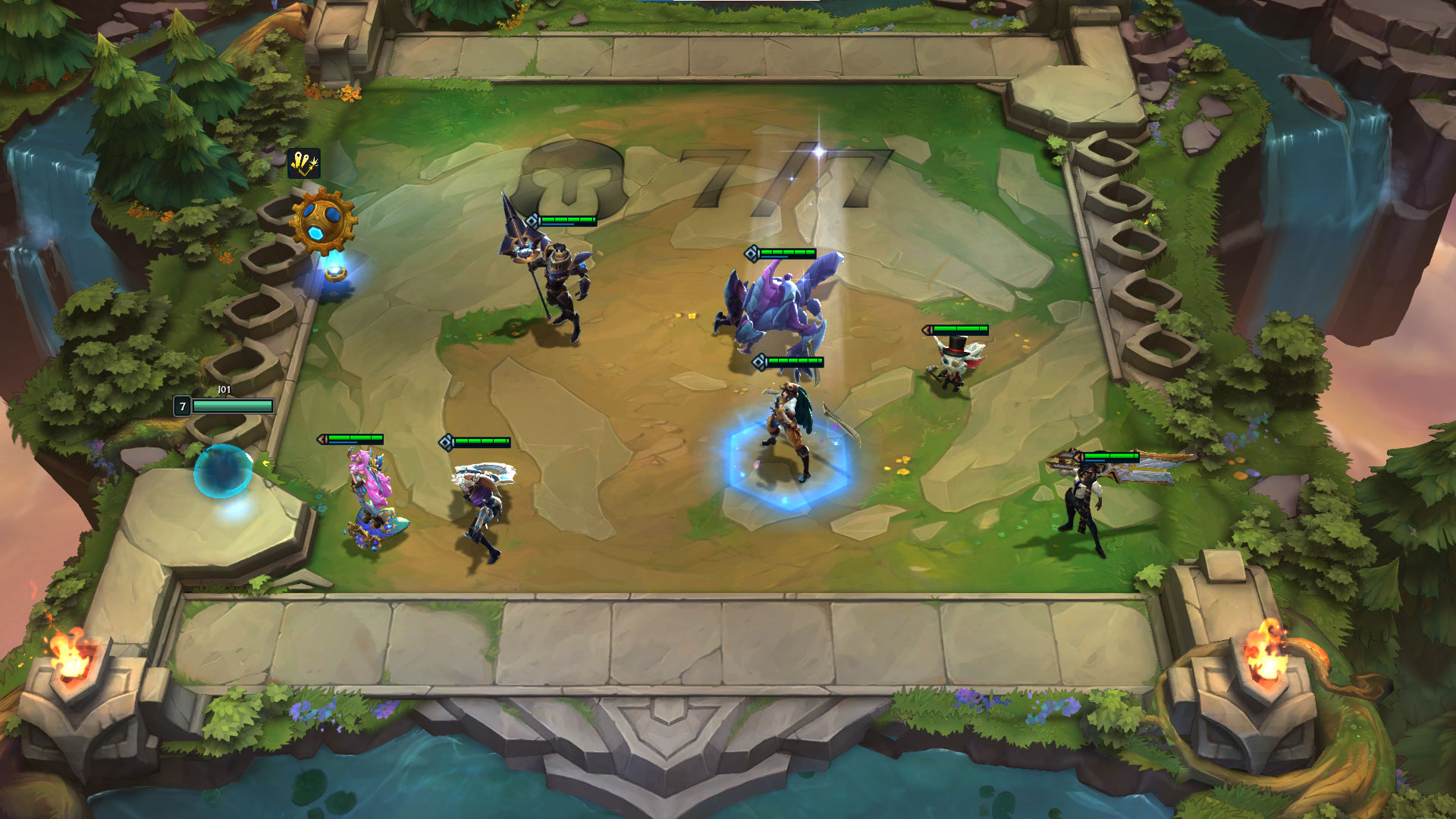 If you’re running Strikers you’ll want to supplement your comp situationally. Is the lobby running lots of magic damage? Then add more Enchanters to keep your Strikers striking. You can also utilize the Socialite spotlight to empower Sivir, who will cast more, attack faster, and of course, hit harder. If the spotlight appears near the front line, you can instead commit to Irelia as your carry with her reset mechanic that’ll have her recasting Bladesurge on the lowest health enemy every time she kills a target.

And while we’re at it, let’s talk about the new Socialites taking the stage. 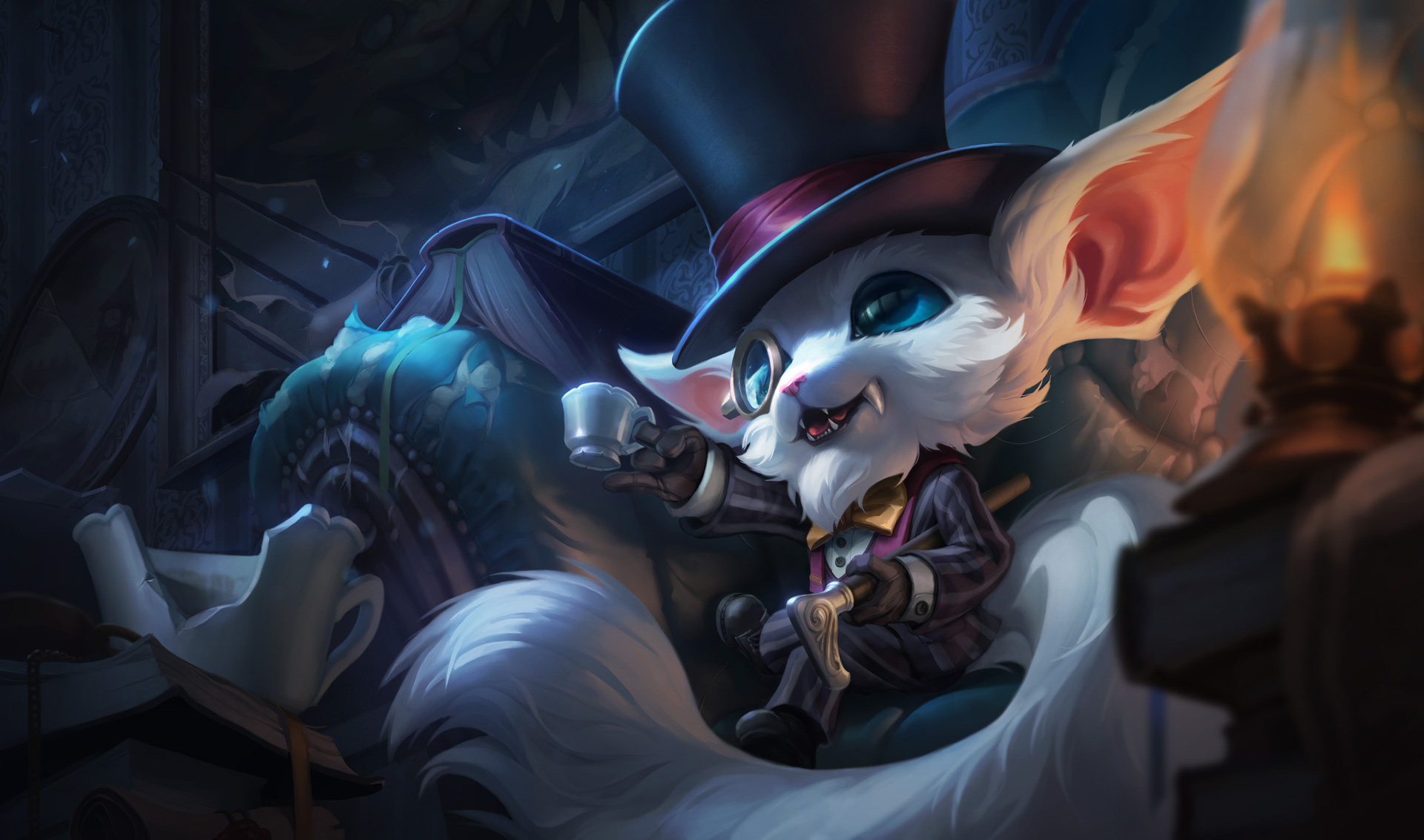 With two new Socialites, the spotlight is sure to shine brighter! Socialite will still give bonus damage at (1), bonus mana regeneration at (2), and omnivamp at (3), but at (5) Socialite, all these bonuses will be DOUBLED! And did I mention that Kaisa is still around? Idk, just sayin.

But let’s talk briefly about the newcomers to the trait, Gnar and Senna. Gnar’s ability transforms him from undeniably charming to undeniably harming, as he gains health and becomes a melee unit. After his transformation, he immediately tosses a boulder at the furthest enemy, dealing damage to all those in its path. His foes better get used to rocks flying into their backline, because after his initial GNAR! Transformation, his mana costs are reduced—leading to a lot more boulder throwing. Senna’s the new Socialite that turns pain into gain. Senna fires Piercing Darkness, which deals damage to all enemies in the direction of her target. For each enemy hit, she’ll heal the lowest health ally for a portion of the initial damage, plus a flat amount. It’s heala cool. 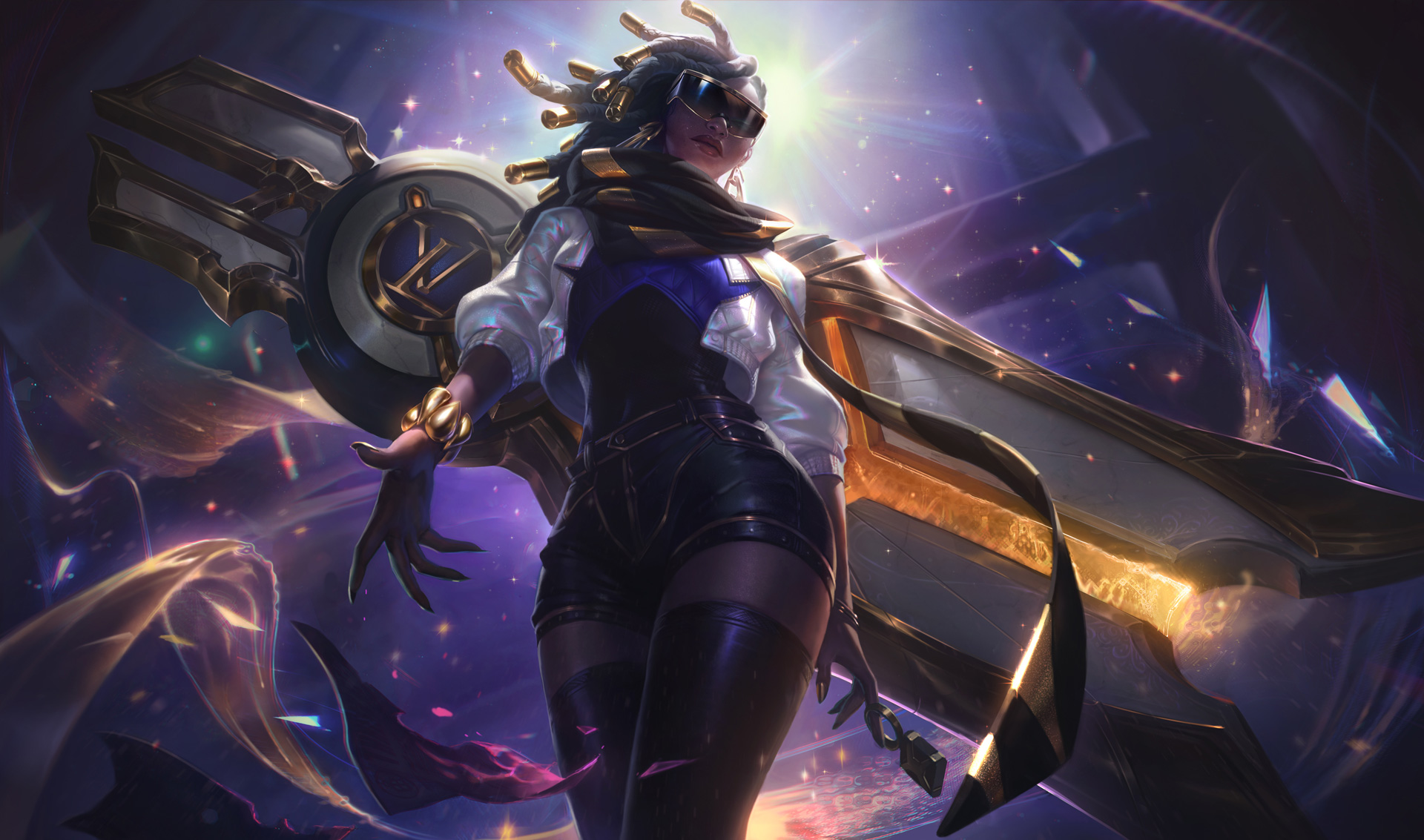 No longer just Sisters, Jinx and Vi have been pulled into the Convergence at an all new time in their careers—as Champions of Piltover and Zaun. For Vi, this means a new ability to show off her charming personality, and badass gauntlets. Vault Breaker allows Vi to shield herself, then punch through her target. On the second cast she dashes through them and deals damage to them and any enemies foolish enough to cower behind them. Every third cast, she instead throws her target into the air and slams them back into the ground, dealing even MORE damage in a circle around her target.

Jinx still has her cliffhanger worthy ability, Super Mega Death Rocket, but with the updated trait, Rival, you’ll want to run either Jinx or Vi, as the two sisters can no longer work well together. When active for Jinx, the trait grants her bonus attack speed for a couple seconds after scoring a takedown. And when Vi doesn’t have to look after her sister, she benefits from reduced mana costs, allowing her to reach that third cast of Vault Breaker even faster.

Here we’ll go over some of the exciting new units taking to the Convergence during Neon Nights. 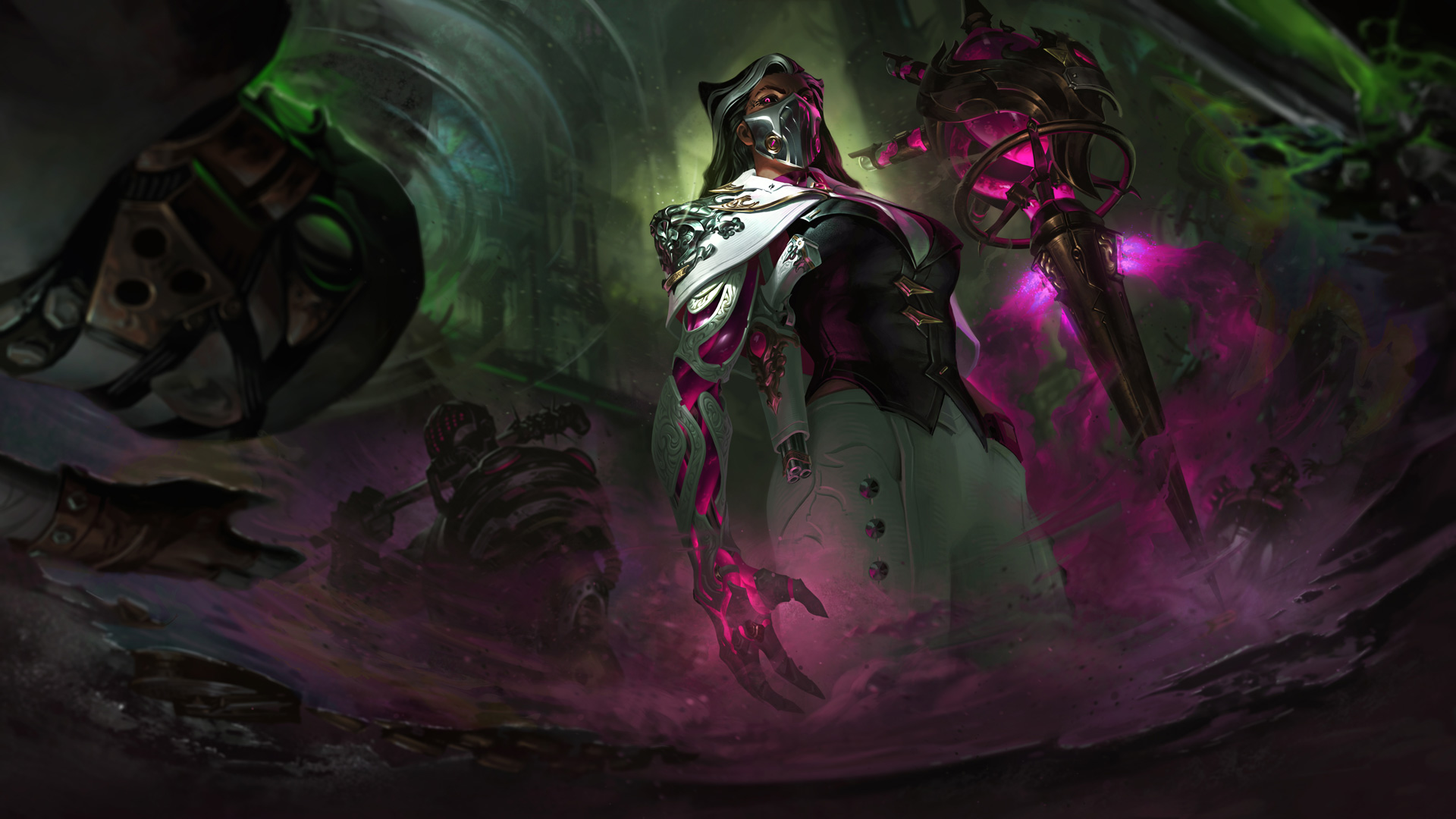 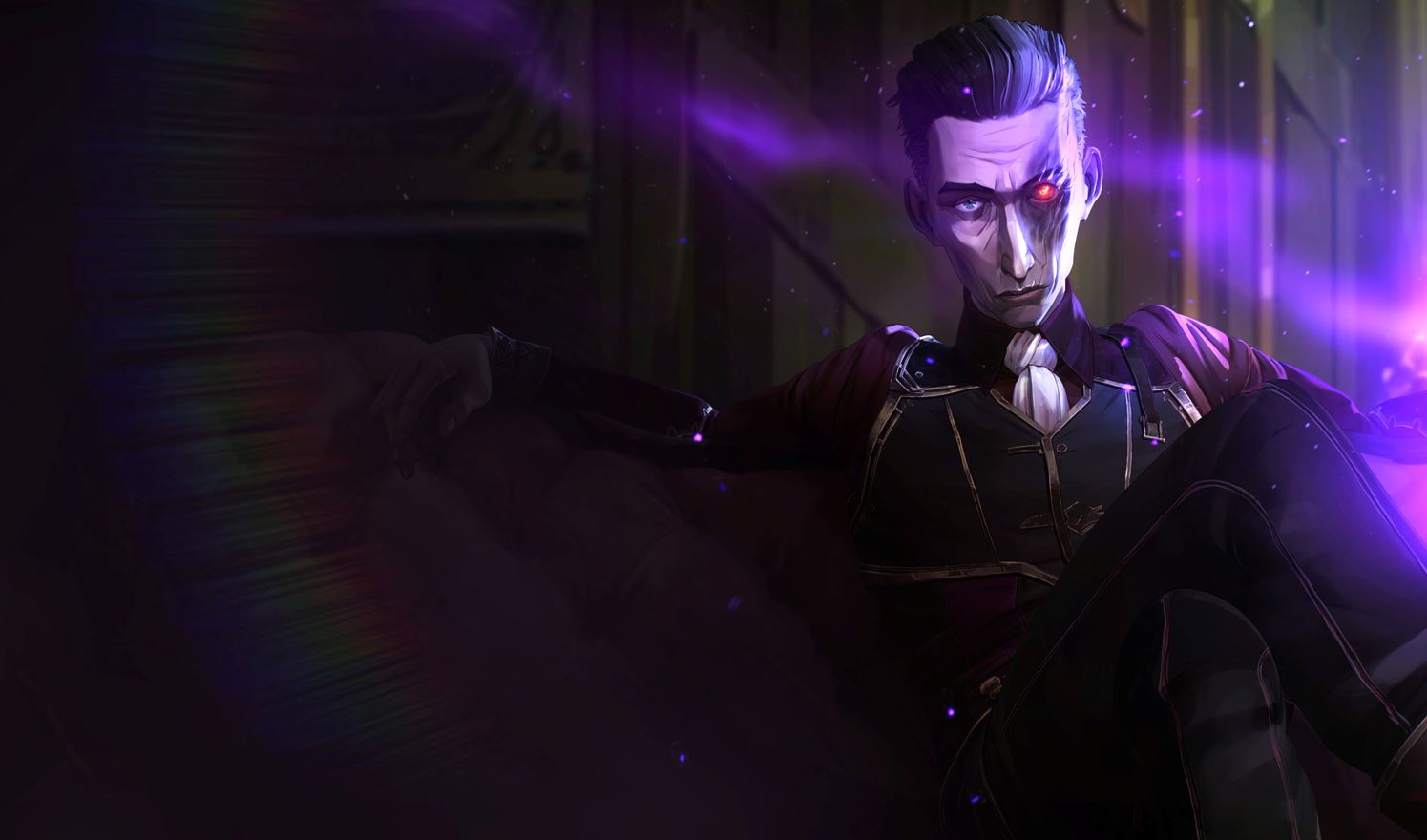 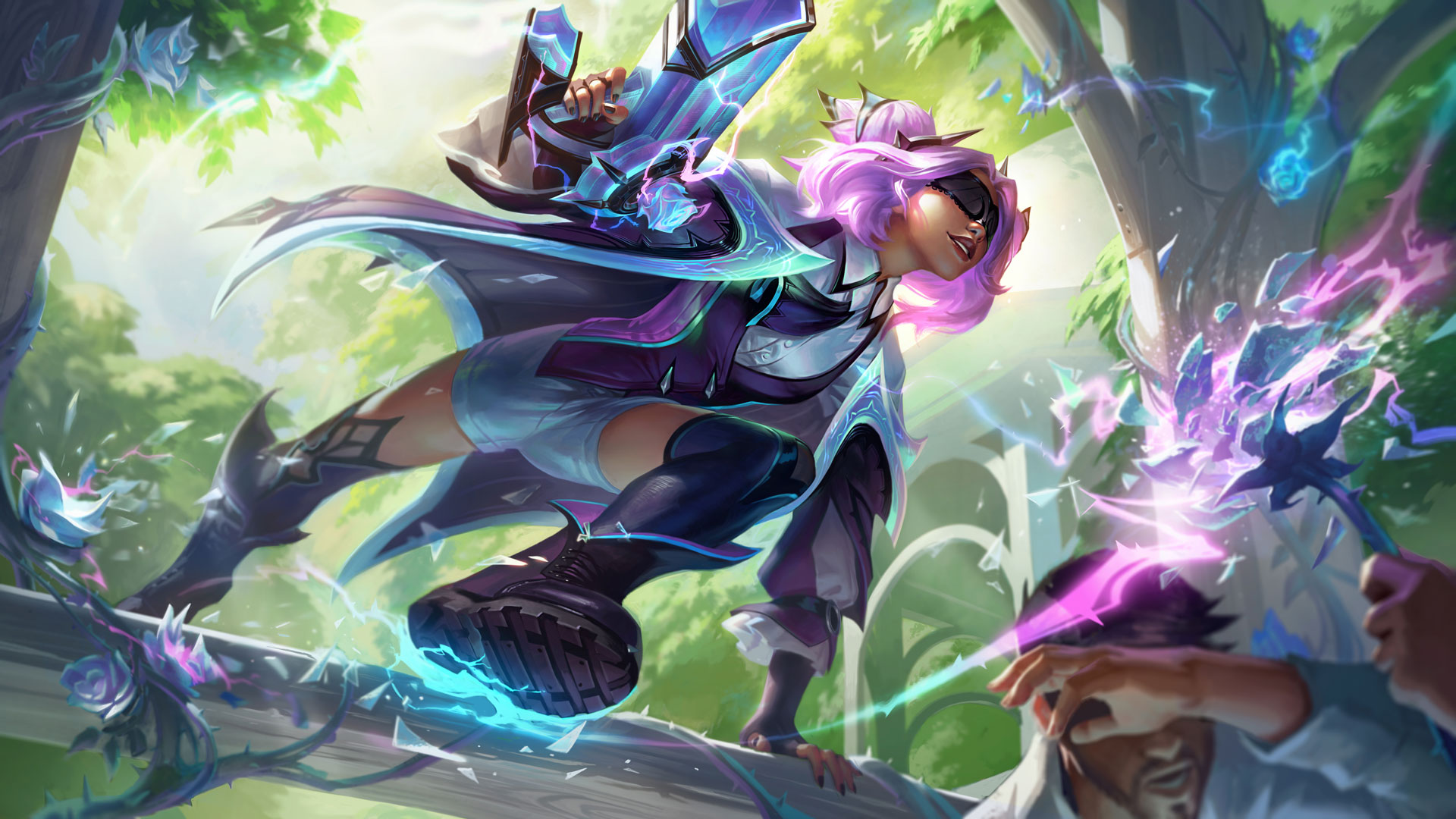 Ah you made it to the end. Just as a reward, I’ve got a cool cheat sheet for you. There’s a high quality version somewhere around here. 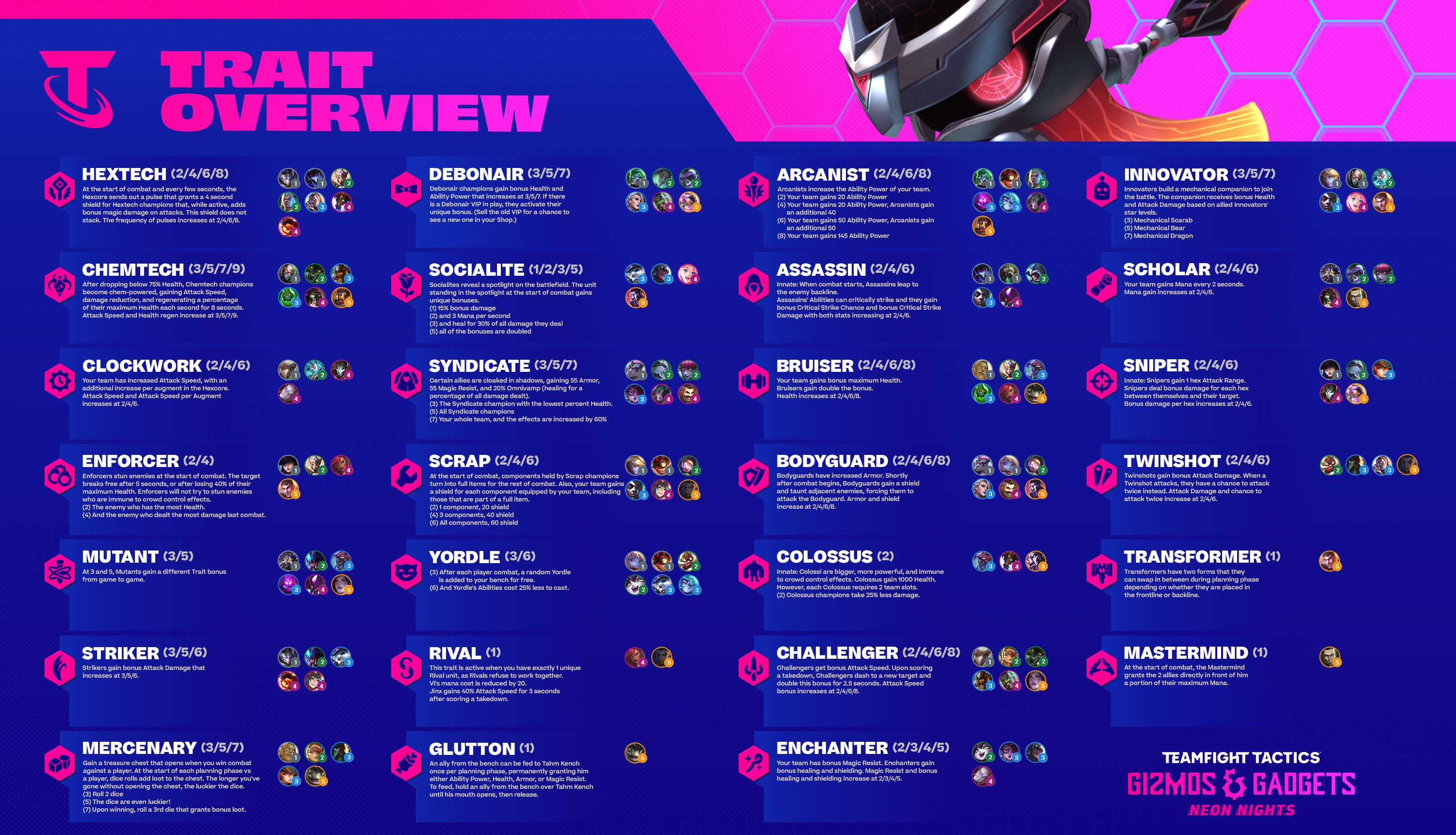 And there it is. While I didn’t hit on everything coming in Neon Nights (there will still be a few surprises) I’m excited to see what you make of all the new champions taking to the Convergence. As a reminder, you can read all about the Neon Nights cosmetics and Augments by clicking on the appropriate links. You'll start seeing everything on PBE February 1st, and on live servers with patch 12.4 early morning on February 16th. The Pass and store content will activate later that day at 11 a.m. Pacific Time!